Dr. Ludwig’s research focuses on computational intelligence which is part of artificial intelligence and is concerned with evolutionary computation, swarm intelligence, deep neural networks, and fuzzy logic and reasoning.
An emphasis is on the parallelization of nature-inspired algorithms using frameworks such as Spark to speed up the execution time of those stochastic population-based algorithms [1–4]. For example, a scalable design and implementation of a particle swarm optimization classification (SCPSO) approach that is based on the Apache Spark framework was proposed [2]. The main idea of the SCPSO algorithm is to find the optimal centroid for each target label using particle swarm optimization and then assign unlabeled data points to the closest centroid. Two versions of SCPSO, SCPSO-F1 and SCPSO-F2, were proposed based on different fitness functions, which were tested on real datasets to evaluate their scalability and performance. The results revealed that SCPSO-F1 and SCPSO-F2 scale very well with increasing dataset sizes and the speedup of SCPSO-F2 is almost identical to the optimal speedup, while the speedup of SCPSO-F1 is very close to the optimal speedup. Consequently, they can be efficiently parallelized using the Apache Spark framework which runs on cluster nodes.
The architecture of the implementation and the results of speedup and scaleup are shown in the figure below. 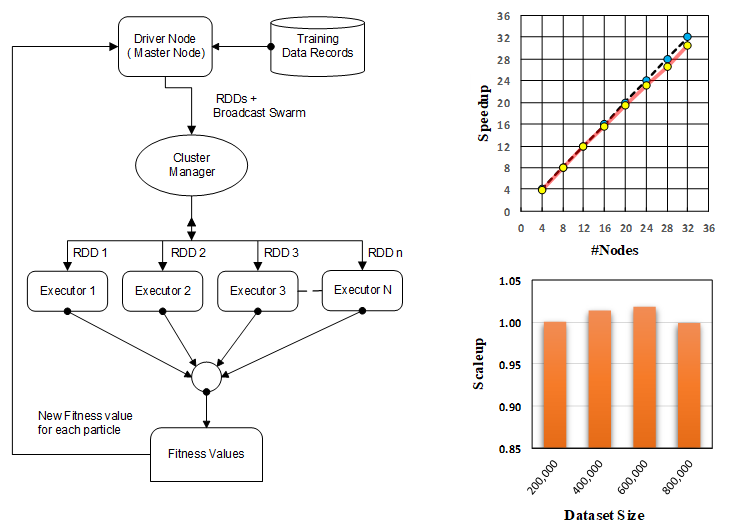